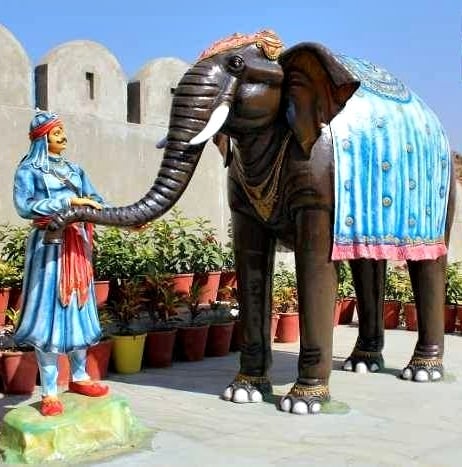 Tribute to Maharana Pratap on his Punyatithi. The Battle of Haldighati between Maharana Pratap and Akbar’s Mughal forces was a stalemate. Neither party won. Maharana Pratap involved in war with Mughals later and regained most of the Mewari territory.

The Battle of Haldighati introduces us to two extraordinarily loyal animals – Chetak, a horse and Ram Prasad, an elephant. Chetak is a name synonymous to Maharana Pratap, but not many of us know about Ram Prasad. While a badly wounded Chetak carried his master Pratap to a safe place away from the battlefield of Haldighati and attained martyrdom, Ram Prasad was caught by the Mughals.

It was not easy to subdue the battle-hardened Ram Prasad in the Haldighati battlefield that had facilitated wound and death of many Mughal soldiers and elephants. A chakravyuh of several mahouts with their elephants led to capture of Ram Prasad and was taken to Akbar.

Akbar was so awestruck after listening to Ram Prasad’s feat in battlefield that he wanted to own him. He changed Ram Prasad’s name to Pir Prasad. He ordered that special care be given to Pir Prasad. The Mughals gave juicy sugarcanes and special food to the elephant but he was so loyal to Maharana Pratap that from the day he was caught he did not eat anything, not even water! Ram Prasad died of hunger after 18 days. Seeing the loyalty of Ram Prasad, Akbar had said that when he could not overpower even an animal loyal to Rana Pratap, it was impossible to overpower Rana Pratap.

Chetak and Ram Prasad find mention in the chapter on the true story of The Battle of Haldighati in book #SaffronSwords (Amazon link: https://www.amazon.in/Saffron-Swords…/dp/B07Q139493).

Tribute to Maharani Tarabai Bhosale on her Punyatithi

Preventive Surgery for Women at High Risk of Breast Cancer