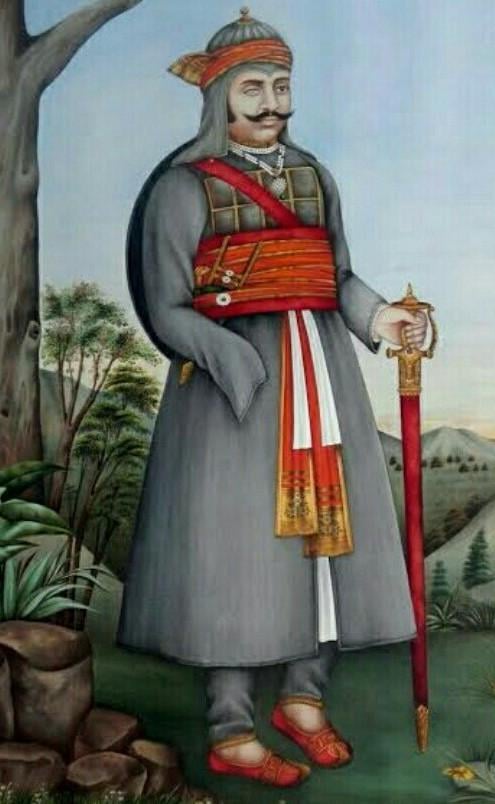 Tribute to Rana Sanga on his Punyatithi. He breathed his last this day, the 30th of January, in 1528 after he was poisoned by his own nobles. Sanga was all geared up for war against Mughal ruler Babur to which his nobles opposed and hence poisoned. Rana Sanga defeated Ibrahim Lodhi (last Lodhi Sultan of Delhi) in the Battle of Khatoli in 1518. The Lodhi army were ‘scattered like dead leaves’ in this battle. Rana Sanga lost an eye, an arm, and an arrow made him lame for life yet he continued his battlefield exploits bravely, keeping the Mewari flag fluttering high. An interesting incident shows how great Rana Sanga was. After winning the Battle of Khatoli, the Rana did not sit on his throne. He instead surprised everyone by sitting on the ground among the lesser nobles. The whole court was bewildered. They asked Rana the reason. He replied that he had lost an arm and had become lame and hence he was not fit for the throne. Medini Rai, a Rajput chief, then took Rana Sanga by his hand and made him sit on his throne.Many often misinterpret that Rana Sanga invited Babur to India. There is no evidence in Indian records of this. It was Daulat Khan Lodhi, Subedar of Punjab and relative of Delhi Sultan Ibrahim Lodhi who invited Babur to India. Yes Rana Sanga did get the news that Babur was on his way to attack the Delhi Sultanate. He did plan that when Babur would attack Delhi, he would attack Agra. And he never sided with Babur and Mughal forces. There is a probability that someone from the Lodhi clan faked as messenger of Sanga. Because not only Daulat Khan but also another enemy of Lodhis Alam Khan also invited Babur. So a 3rd proposal might have well convinced Babur. The reason why few also quote ‘Babarnamah’ to prove their point. Distortions in history textbooks have brainwashed the youth since 70 plus years. Even Bipin Chandra in NCERT book mentions Rana Sanga sided with Mughals inviting Babur. The same Bipin Chandra described Bhagat Singh in Delhi University book as ‘revolutionary TERRORIST’, not ‘freedom fighter’. Our own people calling Bhagat Singh a terrorist! Rana Sanga fought against Babur in Khanwa in alliance with other chiefs, but was defeated (Sanga’s first and last defeat). Had Rana Sanga invited Babur he would have definitely sided with Mughals. Rana prepared for another battle against Babur, but the Rana’s own chiefs poisoned him to death. There were/are no dearth of traitors. Had Rana Sanga not been poisoned and had he involved in a 2nd battle against Babur, history of India would have been different. Another section of people opine Sanga invited Babur to defeat Ibrahim Lodhi. Truth is Rana Sanga defeated Ibrahim Lodhi twice – in Khatoli and Dholpur. Why will Rana need help of Babur to defeat Ibrahim Lodhi? He also defeated Gujrat Sultanate and won many more battles. He never lost a battle except one (the first and last) against Babur in Khanwa. Most Muzlim historical records do not mention victory of Indian kings against Izlamic invaders. For example, details about Mahmud of Ghazni being defeated by Sangramaraja of Kashmir (described in a chapter in Saffron Swords Part 2, to be released soon) do not find mention in main records on Mahmud. Similarly Bakhtiyar Khilji being defeated by Raja Prithu of Assam (described in a chapter in Saffron Swords Part 1) don’t find mention in main records about Khilji. Similarly, Alauddin Khilji’s key reason of his attack of Chittor is attributed to Padmavati but actually mines/wealth of that and nearby region attracted him and not Padmavati. Mewar of Rana Sanga and Rana Pratap was one of the only few regions in Rajasthan that never surrendered or sided with Mughals. Rana Sanga’s tale of valor described in Chapter 7 in #SaffronSwords Part 1 (https://www.amazon.in/Saffron-Swords…/dp/B07Q139493) along with 51 more episodes of our warrior ancestors.Irony is we have Lodhi Gardens, Lodhi Road in the capital city of India – in the name of invaders who plundered Bharat. The Lodhi dynasty, of Afghan origin (that ruled the Delhi Sultanate from 1451 to 1526) were gone and their rule ended centuries ago. Yet we celebrate them everyday. This happens in India only! Rana Sanga defeated Ibrahim Lodhi, the last Lodhi Sultan of Delhi. Shouldn’t Lodhi Road be renamed as Rana Sanga Road? – Manoshi Sinha.