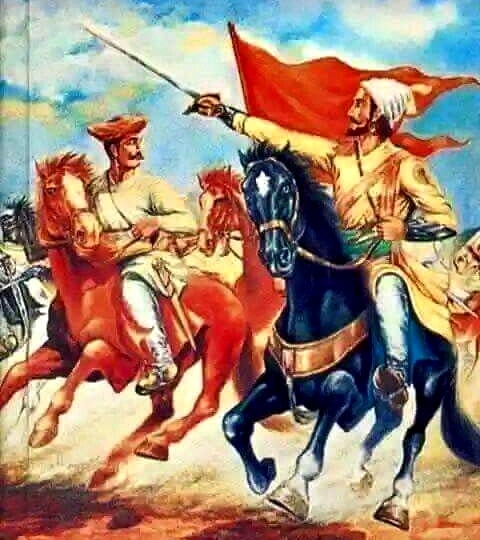 Around this time of January in 1664, the Marathas under Chhatrapati Shivaji Maharaj defeated Aurangzeb’s Mughal forces led by Inayat Khan near Surat. The battle, known as Battle of Surat, started on 5th January. The Marathas won. Surat was then a centre of sea trade under Mughals and a wealthy port city. For six days, the Marathas collected wealth, especially from Mughal and Portuguese trading centers and sacked the city. The local shipping centre in the port was set ablaze. After this attack, revenue of the Mughals reduced and trade for the Mughals in this port from thenceforth did not flourish. Shivaji used this wealth for strengthening his kingdom.

In retaliation, an angry Aurangzeb sent Jai Singh of Amber to curb Shivaji’s activities. Jai Singh in turn, collaborated with Shivaji to attack the Bijapur Sultanate. He also managed to send Shivaji to meet Aurangzeb, who was to celebrate his 50th birthday. But Aurangzeb, by deceit, imprisoned Shivaji and son Sambhaji in Agra. Later, after several months, Shivaji planned his escape and he was successful. It was 19th August 1666. To quote from the book ‘Shivaji and His Times’ by Jadunath Sarkar about Shivaji’s escape from Agra, “In the afternoon of 19th August, he sent word to his guards that he was very ill and had taken to his bed and that they should not disturb him. His half-brother Hiraji Farzand, who looked somewhat like him, lay down on his cot, with a quilt covering all his body except the outstretched right arm adorned with Shiva’s gold wristlet, — while Shiva and his son crouched down in two baskets, which were safely sent out through the line of unsuspecting guards, being preceded and followed by baskets of real sweets, shortly after sunset.”

Aurangzeb held Ram Singh, the son of Jai Singh, responsible for Shivaji’s escape. Though Aurangzeb banished Ram Singh from his court and took away his estates, he later pardoned him and sent him to fight against the Ahoms in Assam. The Ahoms led by Lachit Barphukan won this battle.

A part of Shivaji’s story is described in the book #SaffronSwords (https://www.amazon.in/Saffron-Swords…/dp/B07Q139493) in two chapters on Bajiprabhu Deshpande and Prataprao Gurjar.

Preventive Surgery for Women at High Risk of Breast Cancer