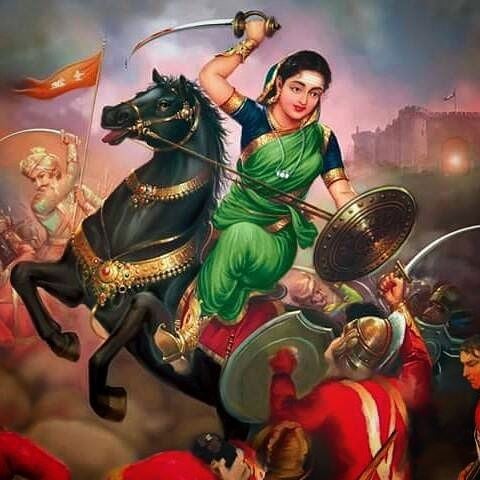 Tributes to Rani Velu Nachiyar on her birth anniversary. She was born this day, the 3rd of January in 1730 to Raja Chellamuthu Sethupathy and Rani Sakandhimuthal of the Ramnad kingdom of Tamil Nadu. She was the first queen in the history of India to wage a successful war against the British!

Velu Nachiyar was married to Muthuvaduganathaperiya Udaiyathevar, the king of Sivagangai. The couple was blessed with a daughter. Muthuvaduganathaperiya Udaiyathevar attained Veergati in a battle against the combined forces of the British and Nawab of Arcot at Kalaiyar Koil on 25th June 1772. The invading British army plundered Kalaiyar Koil and looted wealth. Devising a plan to gather an army and regain her kingdom, Rani Velu Nachiyar fled with her daughter Vellacchi to Virupachi, a neighboring kingdom ruled by Palayakkarar Kopaala Nayakkar.

In 8 years, the Rani gathered a huge army. Her army also comprised of a women wing commanded by Kuyili. They marched towards Sivagangai and on the way defeated the British at several places. Before reaching the capital they learnt that the British had huge ammunition in store at the Raja Rajeshwari temple and that they were well prepared. Kuyili strategized a plan. It was on Vijayadashami in 1780 that Kuyili lit herself in the ammunition store of the British and destroyed it, bursting into flames. This helped Rani Velu Nacchiyar win the battle against British. Kuyili’s story of valor is described in a chapter in #SaffronSwords Part 1 (https://www.amazon.in/Saffron-Swords…/dp/B07Q139493) along with 51 more episodes of valor of our warrior ancestors who defended Dharma and motherland. Rani Velu Nachiyar’s story is included in a chapter in Saffron Swords Part 2, which is under publication. Book 2 has another 52 episodes of valor from across the country from 8th century to Independence.

Image sourced from Google is for representation purpose only

Top Five Medical Innovations of the Past, Present and Future

Tribute to Maharana Pratap on his Punyatithi

Tribute to Maharani Tarabai Bhosale on her Punyatithi