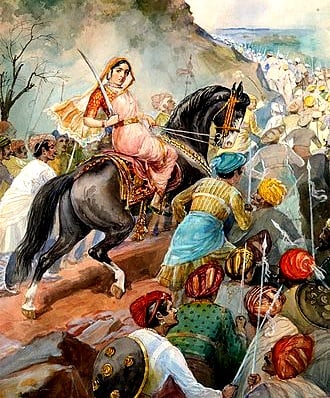 Facebook
Twitter
Pinterest
WhatsApp
Tribute to Maharani Tarabai Bhosale on her Punyatithi. She breathed her last this day in 1761. Tarabai Bhosale resisted Mughal attacks several times, herself leading armies to battle. She was the daughter-in-law of Chhatrapati Shivaji Maharaj and the queen of Chhatrapati Rajaram Bhosale. Her tale of valor is described in Chapter 16 of book #SaffronSwords 1 (https://www.amazon.in/Saffron-Swords…/dp/B07Q139493) along with 51 more episodes of valor of our warrior ancestors from 8th century to Independence.
Tarabai Bhosale ruled the Maratha Empire from 1700 until 1708 as the Queen Regent as the heir to the throne Shivaji II was a minor when the king died. After the death of Rajaram Bhosale, Mughal attacks on Maratha supremacy continued. But Tarabai Bhosale dealt it with an iron hand. She herself led her army into the battlefield and successfully fought against the Mughal forces.
According to Jadunath Sarkar, a prominent Bengali historian, it was because of the administrative genius and strength of Tarabai that the Maratha Empire survived the awful crisis from 1700 to 1707 — when Mughals tried their best to occupy Maratha territories, but in vain. She valorously defended her territories. But we have never been taught in our history textbooks about the unflagging courage and indomitable spirit of this brave daughter of Bharat Mata.
– Manoshi Sinha.
Attached is a 1927 depiction of Tarabai in battle by Marathi painter MV Dhurandhar, sourced from Wikimedia.

Antipsychotic Drugs May Be Harmful for People with Parkinson’s