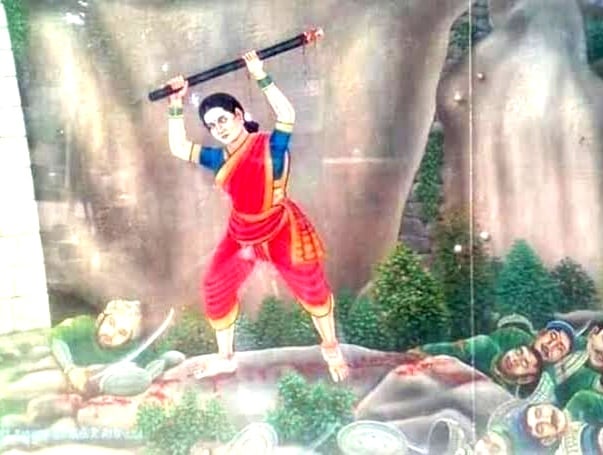 Tribute to Onake Obavva on her birth anniversary. The wife of a fort guard, she single-handedly killed hundreds of soldiers of Hyder Ali with an onake, a pestle, at the impregnable Chitradurga Fort of Karnataka. She defended the fort for several hours before attaining Veergati. How could a housewife engaged in household chores and never trained in fighting, could kill over a hundred of the enemy soldiers? That’s love for the motherland! Ontisalaga Madakari Nayaka was then the Raja of Chitradurga. He defended his kingdom twice from the attacks of Hyder Ali. It was during Hyder Ali’s third attack that Onake single-handedly defended Chitradurga Fort for several hours at the same time killing hundreds of the enemy soldiers. Here is part of an excerpt from the chapter on Onake Obavva from #SaffronSwords Part II (under publication by Garuda Prakashan. Part I: https://www.amazon.in/Saffron-Swords…/dp/B07Q139493) along with 51 more episodes/chapters of valor of our warrior ancestors from 8th century to independence:”In 1779, Hyder Ali and his troops laid siege of Chitradurga fort at the base, unable to enter. Madakari Nayaka had used the fort effectively for defense during the earlier two battles. So did he in this battle in 1779. Hyder Ali had been looking for an opportunity to enter the fort by any means…..”- Manoshi Sinha.

Review Article Uncovers Clues to the Causes of Drowning Deaths

New Study May Lead to Improved Treatment of Type 2 Diabetes